Graphite is an excellent conductor of heat and electricity, and also has the highest strength of any natural material. However, it wasn’t until recently that the metal began to gain popularity.

On that note, it’s interesting to look at which countries produce the most graphite. In 2017, China took the top spot for graphite mining, with India and Brazil coming in second and third, respectively. Here’s a brief overview of graphite-mining production in those countries and in the other top producers last year. All stats are based on the most recent data from the US Geological Survey.

As mentioned, China was the world’s largest graphite producer in 2017. It put out 780,000 MT of the metal, the same amount it produced the previous two years. According to the US Geological Survey, the country accounted for 65 percent of world graphite mining last year, and 35 percent of consumption.

Despite China’s stranglehold on the graphite market, investors shouldn’t necessarily expect the Asian nation’s dominance to continue forever. That’s because in recent years the graphite-mining country has made an effort to streamline production. Part of that process has been taking polluting producers offline, and there have also been plant closures in Shandong, China due to environmental targets. These may further impact Chinese graphite production for 2018.

India produced much less graphite than China in 2017, but is still the world’s second-largest producer of the metal. Its total output last year came to 170,000 MT, nearly the same amount it put out in 2016. 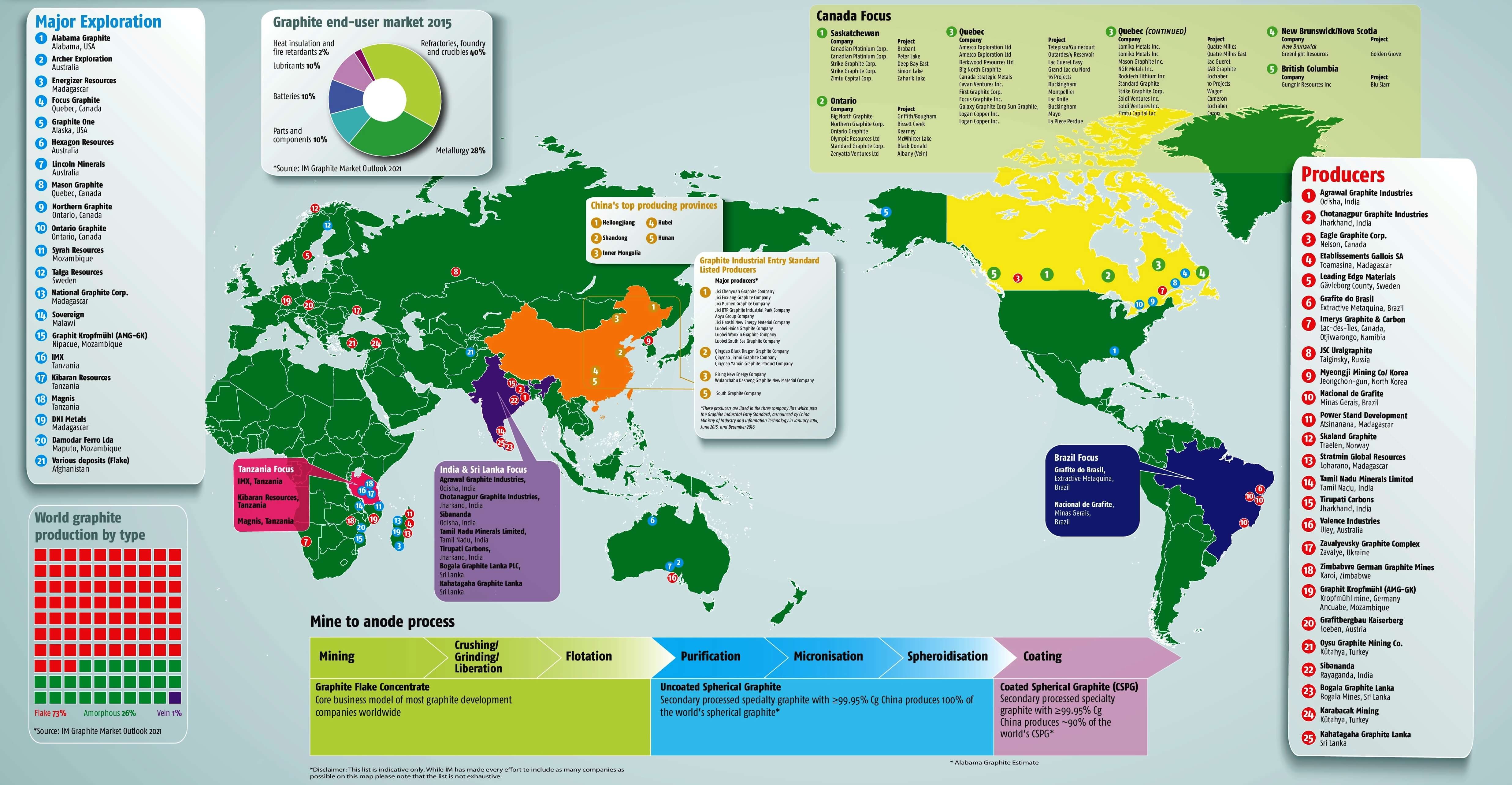 Brazil was once again the world’s third-largest graphite producer in 2017. With 95,000 MT of output last year, it came in significantly behind India as well as China. As with those two countries, Brazil’s 2017 graphite-mining output was flat from 2016.

Little information is available about the Brazilian graphite-mining industry, as the country’s top producers of the metal are private. However, ETF.com does state that the country’s two largest graphite producers are Extrativa Metalquimica and Nacional de Grafite.

Canada’s graphite production remained the same year-on-year, sitting at 30,000 MT. Interest in Canada as a potential source of graphite has been rising for the past few years, particularly since Tesla (NASDAQ:TSLA) said it plans to source the lithium, graphite and cobalt it needs for its Nevada-based lithium-ion battery gigafactory from North America.

Mozambique made a huge leap in 2017, going from no graphite mining on record in 2016 to 23,000 MT last year, according to the US Geological Survey. The country is home to two main graphite players: Syrah Resources and Triton Minerals. Syrah began producing in 2017, while Triton is aiming to start production in H1 2020.

In 2017, Russia’s graphite output clocked in at 19,000 MT, just as it did in 2016. Despite this plateau, the country expects to significantly increase its production during the next several years due to the implementation of two investment projects, Dalgrafit and Uralgraphite. As with many of the countries on this list, little further information is available on graphite mining in Russia.

The Ukraine produced the same amount of graphite in 2017 as it did the previous year, 15,000 MT. Zavalyevskiy Graphite is a large producer in the Ukraine. According to its website, it’s been in operation since the 1930s, producing up to 30,000 tons of natural flake graphite per year.

Pakistan comes in at eighth place for graphite production. The country produced 14,000 MT of graphite in 2017. That is the same quantity as the previous year. Despite the country’s production numbers, information on graphite mining in Pakistan is scarce.

Norway’s graphite-mining output was flat from 2015 to 2017 at 8,000 MT. All graphite deposits in the country contain flake graphite, and are generally low tonnage. That said, many are in favorable locations — for example, close to the sea or to the electrical grid.

In 2017, Madagascar produced 7,000 MT of graphite, down 1,000 MT from 2016. A few companies exploring for graphite in the country are Bass Metals (ASX:BSM), BlackEarth Minerals (ASX:BEM) and NextSource Materials (TSX:NEXT). Click here to learn more about those and other graphite-mining companies in Africa.

Would you like to know more about graphite and its production, cleaning, use? - contact Thermal & Material Engineering Center.

Engineering in the thermal & material technologies

Manufacture and supply of equipment

Sale of materials and components